Tim is a JJ’s List volunteer. In this entry, he shares what it was like to train for and run in the 5K race at the Rally for Autism this year. 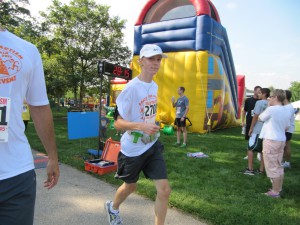 On August 13, 2011, I participated in a 5k Run at the Rally for Autism. It was at Independence Grove in Libertyville, IL. I registered to participate in the run since I got into running over the summer and was training for this 5k run. A 5k run is equal to 3.1 miles. There were a lot of things I had to do to prepare for this race.

When I registered, I sent out emails to people and told them I was participating in the 5k Run for Autism. I received some donations, and I also invited some people to come see the race.

After I registered, I cross trained because if you’re training for a race, you shouldn’t only run. Besides running, I went on a bike ride, and I also went for a swim. I ran a second time around in a full circle that was equal to 3.1 miles. I walked part of the way. It took about 40 minutes to do that run. I then ran another run. The second run after that took about 35 minutes. Every time I kept running the same distance, I was beating my time from last time.

I ran one last time a few days before the race, and it was a good run. My last run took about 30 minutes. I was prepared for the big day.

On the day of the 5k Rally for Autism, I woke up early in the morning, had some healthy breakfast, and then I got ready to go. When I got there, I checked in, and got a race number.

At the event, they had a lot of cool things there. They had raffle games, moonwalks for little kids, and all kinds of fun stuff. There were thousands of people there that day. Everyone was excited about the event that day. There was a first aid tent at the event in case someone hurt themselves when they were running. There was also a place for little kids to stay at if they weren’t participating in the run or the walk. There were good accommodations. . Before the run started, there were warm ups. We stretched and did a little dance exercise to some music. After the warm ups ended, we went to the start line and lined up..

We all ran through a forest preserve and we ran down a path. We had signs that said each mile we’ve ran. There were water stations along the route, so we could all stay hydrated. There were other runners who have autism, and other runners who don’t have autism. Running brings good health to everyone. Running also gets people less stressed out when they’re mad or anxious. It’s good to exercise a lot. I crossed the finish line and saw the time that I finished. My time was 28 minutes. That was pretty fast.

I was running for a good cause that day. There are a lot of reasons about why I wanted to participate in the 5k Run for Autism. I have autism and I’ve learned a lot about what it’s like to have autism. I also like to run, and I thought it would be good to start off with a 5k run. Â The 5k Rally for Autism benefits the Autism Society. No one knows what causes autism. When money gets donated to the Autism Society, then people can do more and more research to figure out what causes autism. It’s always good to make a donation to the Autism Society.

The 5k Rally for Autism makes this run different from all the other runs, since it’s an event where you run for a good cause. It’s good to do a run for autism if you’re into running and you know someone who has autism. It’s also good to do it if you have autism yourself. Everyone at the race was glad they did the 5k Run for Autism.

If you start running, I’d recommend that you start off at a 5k run, and do this 5k Run for Autism. It’s a fun event and it’s for a good cause.

From one runner to another, I am thrilled to to hear about your adventures in running and training. Keep up the great work Tim.
Proud of you!

This is a great article, Tim. It makes me feel like I was right there at this exciting event. Well done — both on the article, and on your ongoing running gains!

Tim, well done! I can’t wait to hear about your 10K race in October. I have a feeling that someday, we will be cheering you on at the Chicago Marathon! You should feel proud!

Nice article, Tim. You’ve become quite the runner, and you’ve motivated me to go for a run today!