Conquering a Fear and Landing on Both Feet

On October 12th, I had a business meeting at the Willis Tower in Chicago, IL. This made me very anxious because I have panic disorder. Â This means taking elevators, trains, buses, airplanes, and being anywhere else I might feel trapped, is likely to make me have a panic attack.

According to Psychology Today panic disorder is âcharacterized by uncontrollable, recurrent episodes of panic and fear that peak within minutes… Worry about having an attack may lead to additional anxiety and avoidance behaviors or to other problems in functioning.â

When I was a child, my panic disorder prevented me from participating in many school activities, including a trip to Willis Tower. So, the moment I found out that the meeting was at the Willis Tower, my mind went to that little girl that never thought it would be possible to take an elevator, let alone take an elevator 35 floors up Willis Tower.

In high school, I was lucky enough to find a Cognitive Behavioral Therapist who taught me tools to use to manage my panic disorder. For the last 15 years, I have used these tools to push myself to do the things I most fear, and accomplish my goals such as going to college and living on my own. This doesnât mean it has always been easy, but now I know how to deal with the anxiety once it appears. Now I know how to better handle my anxiety. That being said, each time I try to overcome a new challenge that scares me, my mind goes back to that little girl who was scared of everything. In addition, I think I had built up a phobia aboutÂ Willis Tower because I was too afraid to visit in the past. 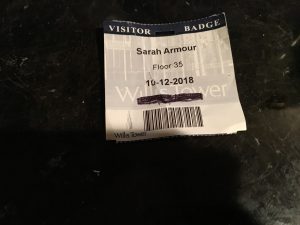 On the day of the meeting, I arrived at my office several hours before the meeting at Willis Tower. I was really nervous and not sure I would be able to manage the train downtown orÂ theÂ elevator 35 floors up Willis Tower, but I was determined to do it. When I got to the train station, I heard an announcement that said there were issues with the train tracks and that the trains were significantly delayed. Itâs important to know that my very worst fear is that trains will stop unexpectedly and I will feel trapped, which usually brings on a panic attack. So I thought to myself âof course this would happen todayâ, but nevertheless I got on the train and made it downtown without a panic attack! 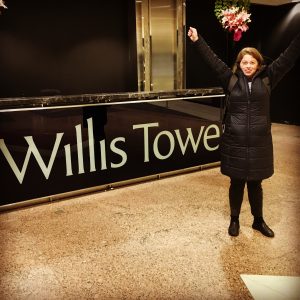 When I arrived at Willis Tower I thought, âOh geez, Iâm really doing this! â Iâm not going to lie, for a moment I thought about turning back, but I didnât want to let the fear win! So, I put one foot in front of the other and got in the elevator. Once I got to the 35th floor, I looked out the window and I felt so proud of myself for making it to the meeting! I finally got to take a deep breath – I was so excited that I accomplished something I thought was impossible.

Excellent job, Sarah! It’s easy to have fear of being trapped with anxiety (especially in elevators), but when you know you have accomplished overcoming your fears, it boosts your confidence level a lot! Going to the Sears Tower (I still call it Sears Tower!) can seem scary because it’s 110 stories high and there’s lots of strangers you don’t know but it can be fun looking out the windows and enjoying the skyline view! I am so happy for you that you didn’t let fear or anxiety prevent you from going! Great job!

Wow, powerful story. I feel like many people, including myself, battle with fears or anxiety of some sort. Glad to hear how you overcame. You are brave!