Walking the Streets of Disability Pride 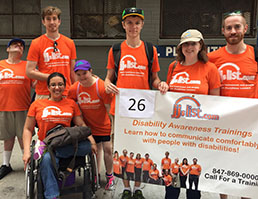 What does Disability Pride mean to me? Â It means being proud to be yourself without fear of being judged. Â Being willing to stand up for who you are. Â Being brave by showing you are not afraid. Â Being willing to talk about what challenges you face and show how you defy the odds and live a life that is always worth living. In my mind the Disability Pride Parade is a way to showcase the additional abilities of people with disabilities. Itâs a chance to show people without disabilities that we are just as important as they are. Â

The very first Disability Pride Parade happened in Boston, Massachusetts in 1990. On that day, the organizers expected a turnout of 500 to 600 people, however, almost 2,000 came. Â Since then, more cities such as Chicago (our first was in 2004) have their own Pride Parades and it has grown and grown. Â The mission is to encourage the belief in society that a disability is stunning and a natural part of human diversity that allows people who have them to take pride. Â

The impact on the disability community in my mind can be best described by the band Grouploveâs song âWays to Goâ â…Iâve got a little bit longer, Iâve got a ways to go.â Â We may have come a long way, but we have âa ways to goâ before people with disabilities are fully accepted. Â

I have been to the Chicago Disability Pride ParadeÂ and it is fun. Â People of all disabilities and others can go and itâs easy to get to. Â You can use Chicagoâs public transportation to get to and from the parade. Â Â Service animals are allowed, but they do not allow pets. Â Itâs nice to see many people coming together to celebrate people with disabilities. Â Join us Saturday!

Where are you meeting up at The Disability Pride Parade on Saturday? What is your “NUMBER” in the Parade Line-Up?

Hey Adrian, this is a great post for this blog. Great Job on it.