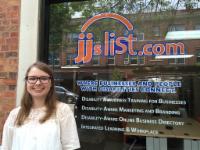 A blog by Abbie Volkmann

My duties as a part of the planning committee included screening several of the films to determine which ones would be included in the festival, finding venues for the films to be shown in, planning the opening and closing celebrations, and recruiting volunteers to help out at the festival. I volunteered on one of the days of the festival, which took place the first week in October. I was responsible for handing out programs and directing people to the theater where the nightâs film was shown.

Overall, I enjoyed being a part of the planning committee for the ReelAbilities Film Festival. It was a lot of work, and required frequent commutes to and from the city. But, the final outcome was a success, and Iâm really glad I had the opportunity to be a part of it. I believe events such as this are important because people need to become more aware of individuals with disabilities, and need to know that they should be treated as equally as those without disabilities. This is important to me because, as a person with a disability, I dislike it when I, along with others with disabilities, am treated differently because Iâm not like everyone else. The festival demonstrated these messages in a positive and active way, and encouraged people to take action and support people with disabilities. I will definitely continue to volunteer with the planning committee, as well as help out with any future opportunities ReelAbilities has to offer. Through ReelAbilities, I was also able to meet filmmakers as well as other people who were interested in disability inclusion. This will hopefully open doors to future job opportunities for me.

thats so great to hear that

ReelAbilities is an amazing experience! I had the pleasure of audio describing a film this year and at the prior festival.

The topic that they discussed in the film festival are playing types of sports, interacting with parents and friends, hobbies or spare time and activities that you have, going to the movies theater, celebrating different kind of holidays, doing chores, seeing at the museum exhibit, going to the zoo, going on vacation and etc. The film festival was good and fun. Everyone enjoyed the film festival.