We at JJ’s List are sorry to hear that the United States Senate failed to pass theÂ resolution for ratification of the Convention on the Rights of Persons with Disabilities. 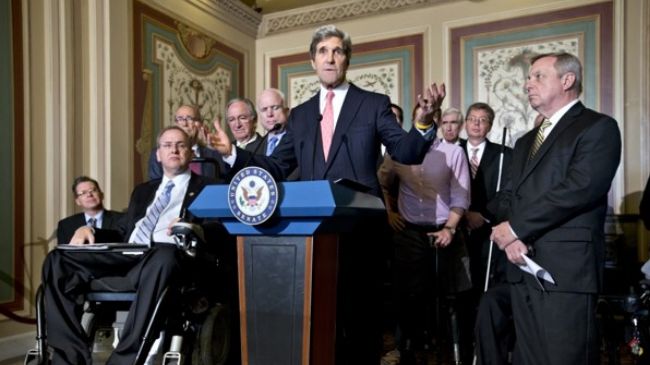 Senator John Kerry speaks in support for the treaty with a group of disability leaders and political leaders.

“Advocates, including Marca Bristo, rallied yesterday to devise a new battle plan and are determined that the struggle is not yet over,” said Amber Smock, Director of Advocacy at Access Living. “They have vowed to let ânoâ Senators know of their disappointment and Senate President Reid has promised to bring the treaty for another vote in the new session of Congress.”

You can take a look at this list of the Senate’s votes and let those who voted “no” know how disappointed you are.

What a disappointment this was and still is. To think that some of those Senators who voted NO even showed up at a reception honoring Bob Dole is absolutely shameful.

Hi .. well where do i start ..I’ve always been a quiet peorsn and to myself all my life. Never been one to talk to anyone about anything not even when something was bothering me. I’ve been told that I am cold in some ways. Laughing is something that I don’t do a lot of. Even when a joke is told or a comedy is on tv which everyone else laughs at. Trying to keep my mind on one thing for a certain period is very difficult for me. I’m always changing the subject then I go back to it. For 5 yrs from the age of 20 to the age 25 .. I use to drink all the time from the time I woke up til I passed out , then I would start again. Plus, I use to take street drugs .. cocaine, uppers, downers and other drugs. I was trying to hide as some people would describe it. It was to deal with being depressed wanting to be happy and content.Then I was diagnosed with bi polar back in 2005 which is a disorder that is past down from generations. My mom fully understands now why I was/am the type of peorsn that she had seen growing up and to this day. I also have fibromylgia which i was diagnosed with back in 2002 but the government didn’t recognize as a disorder unless you have a severe prolonged illness. One of your other readers had the same problem with CPP .. Once I got diagnosed with bi polar was when the government realized that I had another illness. So they accepted my application at that time which I did get a check from 2002 up to 2005 .. now I am on both disabilities .. ODSP and CPP . They aren’t the only illnesses I was diagnosed with. I also have Hep. C which also was diagnosed back in 2002. Even the medication that they have me on helps a bit but there is no miracle ones out there. I’ve tried natural herbs, nutritional drinks and other things to try to work for me with the bi polar and the fibromylgia including exercising. I do deal with life and I’m not on street drugs or alcohol even though it would be so easy for me to go back to that way of life. My son is the one major reason that I’m not on them. I am one to clutch onto a peorsn if you would like to describe it that way to be able to get through life and stay away from the way I use to be. I hope your readers can relate to part of my life. Pauline