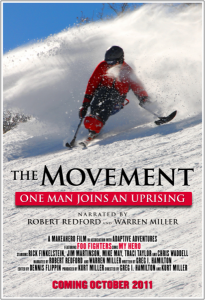 Could a wheelchair user take on the snow-capped mountains of Colorado on skis? WitnessÂ the story of five individuals from all walks of life who facedÂ incredible obstacles, found the inspiration to overcome them andÂ became real everyday heroes. Through skiing, each has ultimatelyÂ discovered or rediscovered the freedom of movement.Â This Sundance Festival opening film The MovementÂ is narrated by Robert Redford and Warren Miller, and features music by The Foo Fighters and U2.

For the first time, The Movement comes to Chicago in a grand one-night only showcase Apr 19 at the North Shore Center for the Performing Arts, with a special live appearance by Matt Feeney and the film’s Producer/Director Kurt Miller!

**Exclusively for JJ’s List Newsletter Subscribers… use code “JJSLIST” for a discount on your general admission ticket!**

All proceeds go towards benefitting our friends at local non-profit Adaptive Adventures.Â Hope you’ll join us! See the trailer for The Movement below:

Skiing is the best thing ever. It’s that most corny of things, a “great equalizer.” I never feel freer than when I’m skiing.