Smart or Greedy: The Lack of Accessibility Features on eReaders 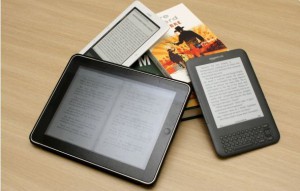 A smart move, or a missing link in the chain? In recent weeks, e-reader manufacturers Amazon, Kobo, and Sony filed a joint petition to the FCC to exempt e-readers from complying with accessibility laws for the disabled. Their argument is that adding e-readers to the equation of being âcompletely user-friendlyâ would make the device more like a tablet rather than an e-reader.

For example, an e-reader and tablet both have significant hardware differences, such as no LCD screen, and no camera. The companies are trying to make a point that an e-reader is in a separate class of its own from the rest of the tablets on the market. The hardware is purposely manufactured this way to help lower costs, and help keep the e-reader in its own class. The software also supports this venture with no built-in apps for advanced communication services (ACS) such as e-mail or IM.

While the manufacturers stand by this petition in hopes of preserving the e-reader class, others argue that the manufacturers are only choosing not to comply with the law, and this is their best complaint or excuse to save a little extra money. Â It is only fair to mention that another argument can be made by the manufacturers that this petition is only against e-readers, and not specific reading applications. Most e-reading applications on the smartphone and tablet market today, such as the Amazon Kindle and Google Play Books, on iOS and Android already come with standard âsettingsâ such as larger text and night vision (which looks like negative mode).

If we are discussing accessibility features on tablets and smartphones, the best company to turn to for the best features in both quality, let alone quantity, is Apple. What many would call âthe gold standardâ for mobile accessibility- features from VoiceOver and Siri to visual and vibrating alerts (the cameraâs LED light can flash for a phone call), Apple continues to set a new standard with all of the features it offers itsâ customers with disabilities.

In order for these features to work, there has to be some type(s) of hardware and software in both the iPhone and iPad. Compared to tablets, e-readers have very few features to offer compared to the iPad. I found the specs of both a Kindle Paperweight e-reader and a 4th generation iPad thanks to Consumer Reports. Some significant hardware differences found in the iPad over the Paperweight that help make accessibility features possible on iOS may include a higher screen resolution, a web-enabled front facing camera, and LED backlight technology, but these specifications are no excuses for any company; let alone industry leaders to hold back on compliance.

I believe Amazon, Koby, and Sony are all capable of complying with the law by making their e-readers accessible without taking away the nature and purpose of their devices. As mentioned before, most e-reader applications on tablets and smartphones today already come with these âsettingsâ and the same can be done for e-readers. Most of todayâs e-readers already have the hardware capabilities to make it accessible. For example, people who are blind or have poor vision have larger text, night vision, and talk back options to help make their phone experiences easier and less of a hassle. And the manufacturers donât have to go all out on features like Apple has to make it accessible to a minimum without sacrificing an affordable or reasonable price point.

No matter how you look at it, the law is going to be against them every time, and they owe it to us, their customers, who would really benefit.

Â About The Author

Alec, who was diagnosed with a learning disability at age 2, is an occasional contributor to JJ’s List. He has worked with the Disability Awareness Players in the past, and is currently working on various digital media projects. He is also studying at Oakton Community College in Skokie, and plans to earn a Bachelor’s Degree in Special Education.