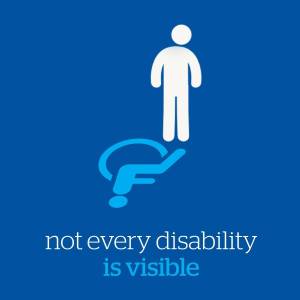 When you think of the word disability, what comes to mind? A person in a wheelchair? Maybe an individual with Down syndrome? We tend to only think of those with a physical or visible disability as actually being disabled because we can see it.

Odds are, you werenât thinking of someone who has obsessive compulsive disorder, social anxiety disorder, or depression. These disabilities are often called invisible disabilities because you canât tell if someone has a mental illness just by looking at a person. âSheâs so bipolar.â âHeâs such a psychotic spaz.â âLook at that freak. What a schizo.â Iâve heard people say these and similar phrases hundreds of times, usually in reference to someone who is acting out of the ordinary. It bothers me so much.

Regardless of whether the person has a diagnosed mental illness or not, using such terms in a negative way can be very offensive. The stigma associated with mental illness is particularly important to me because one of my best friends struggles with severe mental illness. She has been diagnosed with Bipolar I, Anorexia, Major Depressive Disorder, and Generalized Anxiety Disorder and has been hospitalized multiple times. She is doing much better now, but unfortunately the label of mental illness has stayed with her. When she has shared her struggles with friends some have been very understanding, but others were quick to treat her differently; slowly distance themselves and eventually ignore her altogether. It hurts me to see her lose friendships over something that shouldnât matter.

As in my friendâs case, many people fear and avoid individuals with mental disorders, but that is only because they have limited knowledge about them. Before going to college for Psychology, I got most of my information about illnesses like schizophrenia and bipolar disorder from TV shows and movies. Unfortunately, the media often portrays those with mental illness to be extremely dangerous, violent, and manic at all times. I used to think that everyone with a mental illness acted like Dr. John Nash in A Beautiful Mind. He was always talking to people who didnât exist and he thought he was part of a top-secret government mission. Now I know better, in reality, as long as they are seeing a doctor, the majority of people with these illnesses are able to control their symptoms with medication and are able to live full and successful lives.

Elizabeth Nelson is one of the spring interns at No Boundaries.Â  She assists participants to help them meet their individual employment goals.Â  She is currently a senior at Loyola University with a double major in Psychology and Human Services.Â  She will be starting the M.Ed/Ed.S. School Psychology graduate program this fall.

This is a very nice post. I totally agree with it. I know a few people with mental illness and none of them are at all violent.

Nice post! I was very glad that iv’e read your article. It’s really good to know more about mental issues cause iv’e been searching a lots for website today and iv’e love to find-out more for my working website. Thank you for sharing article, its really big help for me.