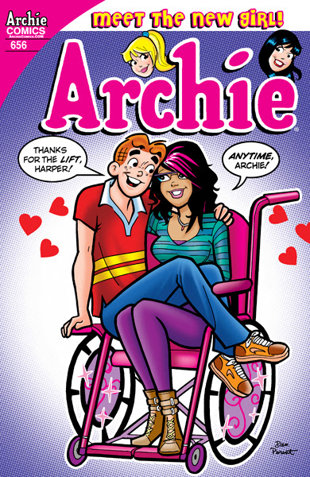 The comic book industry is a multi-million dollar business. Comic book characters with disabilities are nothing new. Theyâve been around in the comic book industry for decades, and have become some of our favorite characters. DC has Barbara Gordon, AKA Batgirl-turned-Oracle and Marvel has Professor X and Daredevil. Recently, another big name has introduced their own character with a disability.

Archie Comics has introduced their first character with a disability, Harper Lodge. Harper is a fashionable, smart and eccentric girl who uses a wheelchair. Harper will be introduced in the June 18th issue of Archieâs eponymous book, and will be a love-interest for the title character.

Harper is based on Toronto-based childrenâs author Jewel Kats, who also has a disability. While Archie is usually chasing, or being chased by, Betty and Veronica, Harper will be another love interest for him.

The creation of the character was spurred by a meeting between Archie writer Dan Parent and Jewel Kats, who is also a fan of the long-running comic book. Kats approached Parent at the Fan Expo in Toronto when she was there to promote her own comic, âDitzAbled Princessâ. That book is about an author who uses a wheelchair and sees her disability as a perk. Hoping to spread disability awareness, Kats suggested that Archie introduce a character with a disability.

In an interview with ThinkProgress, Dan Parent talked about how the character was developed. In particular, he mentioned how Jewelâs fashion-conscious personality was a big inspiration behind Harperâs. In addition, he talked about how the writers were going to integrate her disability as a characteristic, but not make it a major story.

Harperâs first appearance, Archie Issue No. 656, will be available on June 18.

Aww, I grew up reading Archie comics! Glad to see the addition of Harper. I’m curious about her sharing the same last name as Veronica and am wondering if they are related. Either way, kudos to Archie comics. ð