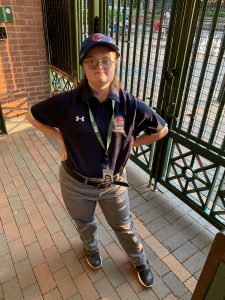 Anna at the gate at Gallagher Way

Like many, if not most, Chicago Cubs fans, I was disappointed with the way the 2021 season went for the Northsiders. However, as a disability advocate and parent of a young woman with Down syndrome, I am thrilled with their diversity and inclusion efforts.

When coming out of a game early in the season, I was so excited to see a few young men with Down syndrome working the gate at Gallagher Way. I wanted Anna to work there, too, and so did she!

I knew she could do the job. She is a huge Cubs fan and is very familiar with Wrigley – sheâs been attending games since she was an infant. (Yes, I was one of those parents). Plus, she lives in the neighborhood and could walk or bike to work.

With the help of the mother of one of the young men I met and my friends, Tom and Mary Hellmann, I was able to figure out how to have Anna apply for a position. By the end of July, she was working the gate at Gallagher Way.

This was Annaâs first real part-time job. She had to adjust to working seemingly the hottest days and nights of the summer and prioritizing work over fun. Sometimes, she had to ignore well-intentioned hugs from fans, deal with boredom, stand for long stretches of time, and watch her beloved Kris Bryant get traded. Working wasnât always easy for her, but even she will say that it was worth it. 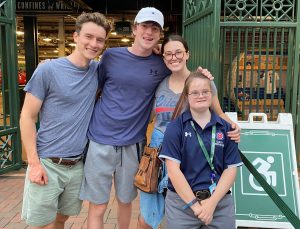 Anna with a few friendly faces

Having a job boosted her self-confidence. Anna was so proud to tell her extended family, friends, and teachers when she got hired. She was also proud to wear her uniform and was so excited when her first paycheck hit her account. She absolutely loved it when she saw someone she knew come through the gate.

But this is not really about Anna. Itâs about the Cubs and their overall hiring practices. If you went to the ballpark this year, you may have noticed that there are many staff who use wheelchairs or have Down syndrome or Cerebral Palsy, for example. Some of Annaâs colleagues disclosed their invisible disabilities with her because they felt comfortable telling her â Wearing your disability has its advantages! Maybe I was just more tuned in this year because of Anna, but I donât think so. To me, it is obvious that the Cubs are making a concerted effort to increase disability diversity. 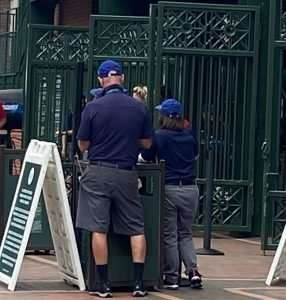 As her âjob coachâ, I witnessed how welcoming just about everyone at the organization was to her from the moment she showed up at orientation. There were definitely some people who were not sure how to treat her, so they tended to avoid her. But the majority of her colleagues treated her with respect and dignity. They engaged with her, which is often a difficult thing to do because of her shyness, and helped her if she had trouble clocking in or out. Along with all their colleagues, they looked out for her, and Anna was accepted as part of the team.

You can see the efforts the Cubs have made in increasing and improving accessibility features, which is wonderful. What you may not see, but what is beginning to grow, is an increase in acceptance of people with developmental disabilities at the organization, a microcosm of society. Is accessibility or acceptance at 100%? No. But the Cubs organizationâs efforts toward increasing diversity and inclusion are ones others should follow.