How to Do Something Your Community Will Love

Posted by JJ Hanley on March 10, 2017 - 2 Comments
Â You have a disability. Â You want opportunity and independence in your community. Â How do you help make that happen? Â “Get involved,” says Caroline Brown, a volunteer with a candidate for the mayoral election in Evanston, IL. Â Brown was a guest speaker recently at No Boundaries and she told participants about how people with disabilities can make communities more disability aware: Â 1. learn how your local government works and 2. take action on issues that affect you. Â This is called civic engagement.

No Boundaries participants learned what a “ward” is (there are nine wards in Evanston, IL). Â Each ward has its own representative. We used a color-coded map to identify the wards that some participants live in, and Brown show us the list of our representatives. Â “I learned that I live in the 2nd ward and who my alderman is,” said John, a No Boundaries participant and Search, Inc. employment services client. Â “We learned that Evanston has a city manager kind of government. Â This means that the city is run by the city manager and the Evanston City Council. They make decisions about taxes, how to fix roads and trains and how to pay for it.” Â The City Council also creates local rules or laws and they are called ordinances. Â Another participant was surprised that the city manager has more power than the mayor in his community. Â “I also learned that I could be a better citizen by knowing what’s going on in my hometown,” said Matt.

Brown helped No Boundaries participants brainstorm ideas about how to help communities build their disability awareness: 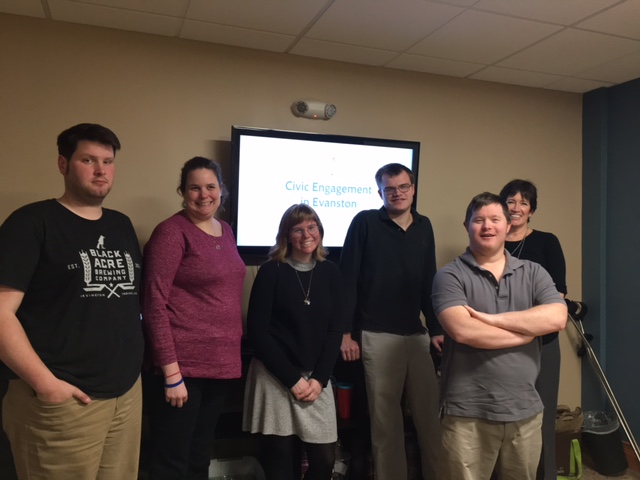 “I think that when people ride bikes on the sidewalk they should be fined,” said Matt. “I will email my alderman about the need for more bike lanes.”

“I might look for a volunteer position,” said John.

The more involved people with disabilities become in all parts of civic engagement, the more disability aware our communities will become.

Filed under Inspiring People, No Boundaries - Tagged with no boundaries
Share this:

I want to thank all of us making the Blog it so great to read. We put our hearts in this blog and we learn a lot. I want to thank mis Brown to come in to each us.

I learned that there is a color-coded map which will make it easy for me to see what ward I live in.