How I Helped Others By Sharing My Past 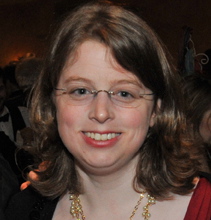 In January, Â I had one of the most amazing experiences in recent memory! I spoke about my panic disorder to a fifth grade class at my old grade school, Joseph Sears School. Â I was asked to speak by the Center for Independent Futures, an organization that works to help young adults with disabilities like myself become more independent.

I had conflicting feelings about speaking at my grade schoolÂ due to several bad memories stemming from my time in there. Â I was treated poorly by some of the teachers when I was a child. When I attended Sears, I donât think the staff knew how to deal with my panic disorder because at that time educational materials regarding mental illness were not widely available. As a child I felt labeled by my disabilities, when I wanted nothing more than to be known as just Sarah. Despite my reservations, Â I made the decision to speak at Sears. Â I hoped my words could change how kids with disabilities are treated.

The night before the presentation there were many thoughts running through my mind. I was excited to share my story, but I feared seeing old teachers that would make me feel uncomfortable. Â I was also worried about if I would be able to connect Â with my Â audience.

The morning of my presentation I was thinking, I am who I am and if they donât accept me that is on them. The presentation was in the multipurpose room where I had been many times before when I was a student at Sears School. Being in that room made me feel like the misunderstood little girl who was defined by her panic disorder. But, Â I built upÂ my confidence by repeatedly reminding myself that I was there as both a professional and advocate.

As the fifth grade class filed into to the room, I realized I knew some of the kids from when I was a teacherâs assistant at a local preschool. I began feeling apprehensive about sharing my challenges. I was scared to open up to them because they knew me from the past. Â But I realized Â how powerful it would be for them to learn that a former teacher of theirs has struggles just like anyone else does. Just as my confidence was beginning to resurge, I noticed a Â friendly face in the crowd, my former special education teacher. My teacher had always taken the time to understand where I was coming from when I was her student. Seeing her helped me remember that for every person in my past that didnât understand me, there was someone who believed in my potential.

As I read my speech to the children and teachers, I saw something from the audience that I didnât expect: respect, understanding, compassion, empathy and a genuine interest in my story! Â When I finished Â I heard the audienceâs applause. Â What truly impacted me the most was the little eyes looking back at me, each trying to connect with me on a deeper level. It was in that moment I knew my panic disorder isnât what defines me. Instead, it is my courage, my strengths and my ability to connect with others that makes me Sarah and not âSarah with a disability.â

Way to go, Sarah! It can be difficult to speak to a group about but it is empowering! I applaud you for being so strong and courageous. You are correct about being accepted for who you are-I encourage you to continue to share your story with others.

i loved what i read good job

I could just see your self confidence growing during this blog posting! Your ability to adjust to challenging situations and get stronger each step of the way. Wonderful job!