Sarah Goldberg is a JJ’s List volunteer with Cerebral Palsy. This post, she shares with us what it’s been like trying to get a service dog, and how she, after 2 long years, finally has Bauer in her life.

Hi, my name is Sarah Goldberg and I am 22 and I am a person who is living with Cerebral Palsy. Cerebral Palsy is a condition which affects many different parts of the body such as the brain and the extremities. For me it mostly affects my extremities, some way more than others and that is what makes my life a little more challenging than someone who doesnât live with a disability.

So thatâs why about two years ago I started to think about getting a service dog so I could become more independent then I already am. I thought the idea was great. Besides, itâs a dog; Who wouldnât want a dog? And this is not just any dog. Service dogs are very smart and are trained to do many different helpful tasks such as help you get up off the floor, do your laundry, and if youâre old enough, they can even help you get a beer. Pretty cool huh? But for me it would be mostly to help me with my balance issues.

My search for a service dog started about 2 years ago when I saw someone at a fair with one. It seemed like a great idea, since I’m not a fan of having to ask for help walking down stairs. So we started asking people with dogs where they got them and doing research online. The search wasn’t as easy as anticipated. Some organizations said that because we already have a family dog, we couldn’t have a service dog. Others cited that I did not live in the right area. One agency even said I was 2nd on their list, but never got back to me despite my calls to them. 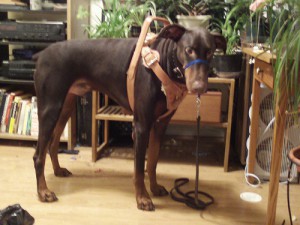 Then last summer I went to the Disability Pride Parade in Chicago. I marched in the parade and at the end there was a gathering where every organization that participated in the parade had a booth to share what their organization is all about. Thatâs where I spotted My Angel With Paws. Hooray! My Angel With Paws brought dogs to show and I was drawn to them. There were golden retrievers, labradoodles and some black labs. These are the kinds of dogs that are trained to become service dogs because they are big and sturdy, and very smart animals but most of all they are very friendly and make good companions.

I was very excited to have met the people and the dogs and they seemed very willing to help me get a dog, but I knew that it would be a while before I would actually have the dog. It takes about two years to train a dog. As a puppy they go to live with a family for about a year and a half and then they move on to advanced training (which is in Florida for this organization), so as you can see it is a long process and kind of a waiting game for the clients. For me I have a hard time waiting so its been hard because I feel that I could be using the dog now but I have to wait.

During the waiting game Iâve been pataient. My Mom and I had the chance to go to Ikea and meet the dogs and see what they could do. It was very interesting because who would think to go to Ikea to play with dogs? We went there because they wanted to show us how the dogs could open and close cabinets and push elevator buttons and sit quietly under a table while you are eating. Bree, the dog I was with even picked up my keys for me and walked with me. And then there was Darbyâhe is a golden retriever and only 9 weeks old and so cute with his little service dog vest on. From what I saw, these dogs are pretty amazing.

Sarah, her mom, and Bauer at the Disability Pride Parade 2011

Since Sarah wrote her post, she’s finally been able to welcome Bauer, her very own service dog, into her family. While Bauer still has to spend the next few months getting trained in Florida, Sarah’s been able to spend 4 days with him in Chicago.

“It’s been great. I just love having him and it’s been good working with him as my partner in crime. He walks with me and gives me balance.” She’s had a chance to take Bauer out and about with her, including to places like the Willis Tower. When asked how businesses have reacted to Bauer’s presence, she said “everyone’s been nice to him, soÂ I’ve had no problems. When we go out to eat, Bauer just waits patiently under the table.”

Now that Sarah’s back in college, she’ll have to wait till January to see Bauer again. She’ll be heading down to Florida to fulfill a mandatory 2-week training period with Bauer. “I have to train with him, learn commands and take him places. Since someone else is training him now, he’ll have to get used to being with me. It’s been a life-changing experience because he helps me become more independent. I miss him and want to come back sooner.”

Hi Sarah. I’m glad you’re pursuing this. Best of luck to you! My former coworker Kim has a service dog and has been very successful.

Hi Sarah your dog looking so good. And all picture is very nice.

Even though this article was posted awhile back, it’s still such a heartwarming story! I can relate to this issue personally, as I have a friend with cerebral palsy that has been trying to get a service dog down here in Texas for about a year now.

You ought to take part in a contest for one of the highest quality
blogs on the web. I am going to highly recommend this web site!

I have a service dog for stability too. I suffer from neuropathy and cannot feel my legs or feet. This makes it hard to walk a straight line and even stand sometimes. Uneven ground is a nightmare for me to navigate. That was before I got my dog, Gizmo. He’s a male boarder collie and weighs 65lbs and stand 23 inches tall. With Gizmo by my side I can walk a straight line and have no fear of falling like I do without him. I’ve had Gizmo since he was 5 1/2 weeks old and have been training him for stability work since then. Actually the trainers are training me to train Gizmo. He’s 16 months now and when he puts his service dog vest on he knows it’s work time and behaves accordingly. He is without a doubt the most loyal and gentle soul I have ever known. Not an angry bone in his body and always up to meet other dogs and people. Besides the help he brings he also brings a lot of love and companionship, but his biggest contribution is keeping me active. Gizmo is my blessing from God.

I hope you and Bauer for the same type of relationship Gizmo and I have. After not having a dog for 15 years I know what I’ve been missing.

God bless you and Bauer.

I enjoyed reading your blog. I am so happy you finally got your dog. I hope that Bauer is helpful to you and can increase your independence. Best wishes to you.