Recently, Disability Lead, formerly ADA 25 Advancing Leadership, hosted another webinar in their Power Series highlighting leaders in the community who have disabilities. In this series, Disability Lead hosted Actor and Comedian, Maysoon Ziyad. Maysoon Ziyad told her story about how she was discriminated against at Disney World, and she went on to conclude her segment by saying, âThe world Is broken, but we can fix itâ¦ Your Voice is your weapon against injustice: Disability Rights are Human Rights. I beg you, use it.â

These words inspire me to speak up more to help create a more inclusive society for people with disabilities. Her story demonstrated that words serve as powerful tools and can help change the way people view disability.

Disability Lead is starting a new phase as an organization, so I sat down with Executive Director, Emily Blum to learn more:

What inspired ADA 25 Advancing Leadership to change its name to Disability Lead? 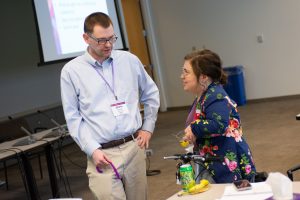 Emily: âThe name change to Disability Lead was suggested by a former fellow and current member, Brian Heyburn. The goal was to include the word disability in the name because, at Disability Lead, we believe that disability rights are human rights, and there is nothing wrong with having a disability. Initially, in 2015 when ADA 25 Advancing Leadership was established, the organization was convened by the Chicago Community Trust.Â  However, in 2019, ADA 25 Advancing Leadership shifted to become independent and the name ADA 25 was becoming outdated because in 2020 we celebrated the 30th anniversary of the ADA.Â  Because the name ADA 25 was becoming outdated, we felt that it was necessary to rebrand the name to Disability Lead.â

What does the new name mean or what do you hope it inspires in others? 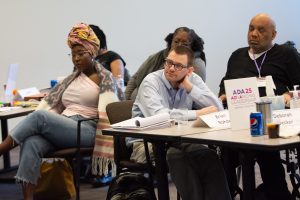 Building Leaders in the community

Emily: âThe new name, Disability Lead, suggests that people with disabilities have the ability to be leaders in the community. The new name is a symbol of how people with disabilities can lead with power and influence.Â  At Disability Lead, we hope that people are inspired to identify as having a disability and recognizing that disability is front and center.Â  The goal of changing the name is also to embrace having a disability and change the culture and narrative of disability in society to a positive aspect of oneâs identity rather than the common stereotypical negative aspect of disability.â

How does changing the name to Disability Lead have a positive impact on the community?

What does the new logo mean?Â

Will the organization continue to recruit fellows? If so, how can someone apply? 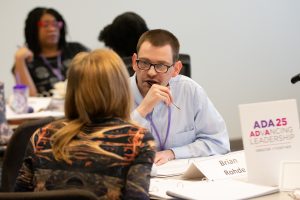 Emily: âYes! Applications for 2022 fellows open on June 30th, 2021.Â  You can apply at www.disabilitylead.orgâ

As an ADA 25 Advancing Leadership Fellow, I built skills crucial to my search for employment and I became more passionate about advocating for disability rights in the community. The Power Series, which included presentations by Stacey Abrams, Founder of Fair Fight; Andrea LaVant, Producer for Netflix Series Crip Camp; and Maysoon Ziyad, enhanced my experience.

I encourage others with disabilities to become positive disrupters and apply to be a 2022 Disability Lead Fellow.