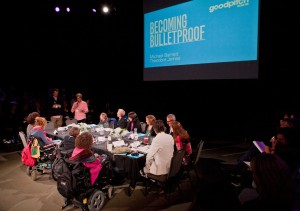 Last week, we had the privilege and honor of being invited to the first-ever Good Pitch Chicago, an amazing day-long event where celebrities can be spotted and documentary filmmakers pitch their films in hopes of getting funding. Enriching?Â  Yes! Enlightening? No doubt!

Good Pitch is a project by both BRITDOC and the Sundance Institute Documentary Film Program and Fund. The first Good Pitch event was held in the UK about six years ago. Last year, two out of the five documentaries nominated for an Academy Award for Best Documentary were financed by Good Pitch.

The directors and producers of the eight documentaries showcased at Good Pitch had about seven minutes to pitch their film in front of a roundtable which is made up of about 8 to 10 people who are already aware of the documentariesâ premises and want to help finance and market the films. The films are also given the chance to be financed by guests in the audience, who volunteered money and support for the films.

The other documentary that I saw being pitched, which was looked at right before âBecoming Bulletproofâ, was a film called âThe Dreamcatchersâ, about a non-profit organization calledÂ TheÂ DreamcatcherÂ Foundation, which helps get prostitutes off the streets and into safe houses.

âThe Dreamcatchersâ was pretty powerful. The film was hard-hitting, emotional and pretty audacious. The women from the non-profit organizationÂ TheÂ Dreamcatcher FoundationÂ were risking retaliation by driving up to the prostitutes and (figuratively) pulling them into their car and driving away. There was no music in the trailer that I saw, only raw footage and emotions.

As a result of the trailer, the organization received plenty of donations and audience members donated enough to build solar panels for the Dreamcatchers safe house. We think the âDreamcatchersâ pitch was successful, much to the relief of the filmmakers, who looked rather nervous (which is understandable) throughout the pitch.

âBecoming Bulletproofâ was pitched by Theodore James, the producer, and Mike Barnett, the director. They noted that there were only six characters on TV with disabilities, and of those six only one character was played by an actor with an actual disability. The filmmakers intended to use this film to raise awareness Â of the problem around Hollywood and actors playing individuals with disabilities onscreen and they needed $130,000 to finish the film.

Their pitch was a good start, but it received some skeptical reactions from the roundtable. The first half of the trailer looked like the kind of movie that would help serve its purpose, but the second half began to slip into the typical Hollywood âinspirationalâ depictions of people with disabilities. While the trailer was pretty good and I assume the actual movie is better, the reaction to the trailer from the roundtable wasâ¦ less than ideal.

Much of the complaints to the trailer revolved around the way it was presented. Much of the depictions of individuals with disabilities in media are of the sappy, schmaltzy, sentimental and inspirational type that have become a clichÃ©. Indeed, the filmmakers acknowledged this, saying they made the trailer for a specific reason.

Still, the discussion afterward was rather enlightening. The roundtable included the likes of Jeff Prechter of the Prechter Fund, who donated $75,000 for the camp itself, Lois Vossen of the PBS series âIndependent Lensâ, JJ Hanley, the founder of jjslist.com and Emily Smith of The Art of Life Foundation. Much of the roundtable agreed that the film was a good start, but would have to be improved before itâs shown to the general public.

However, the filmmakers, to their credit, understood that a stamp of approval wasnât good enough. Instead, they were asking for advice from the roundtable about how to improve the film. One thing they did get though, was a different stamp of approval. They had brought a man named AJ, a man with Cerebral Palsy who was the star of âBulletproofâ. A woman named Emily Verelien Strom was in the audience and she offered to give AJ a meeting with her husband, who is an agent at the Creative Artists Agency.

The filmmakers did not get the $130,000 they needed, but they did come away with some good advice. We took away a sense of direction, if not accomplishment from these filmmakers. Although theyâd been constructively hammered throughout the hour-long pitch.

We felt that the filmmakers were treading a thin line with the work theyâd already done. As we mentioned previously, most depictions of people with disabilities tend to be of the inspirational, sentimental type, which really comes across as patronizing. The thing about the depictions of people with disabilities is that thereâs a thin line between accurate, empowering, sentimental and patronizing. The filmmakers honestly want to tell the right story, but theyâll need to improve it until they get the depiction they want to show.

*This article was written by jjslist.com staff and our No Boundaries – Train for Work, Train for LifeÂ participant.

This was a cool event. It raised question and debate about media and disability. Very complex issues were discussed.

I am glad questions are being raised about individuals with disabilities in film. Great blog!