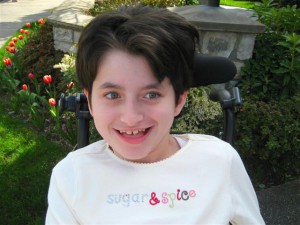 If you were a regular reader of articles on disability issues in Jan 2007, you might have come across the then-controversial story of Ashley – the beautiful girl whose severe brain disorder meant that she was going to remain permanently at an infant level both mentally and physically.

Ashley’s parents were, as far as they knew, the first ones to try a preventative treatment involving growth attenuation through high-dose estrogen therapy, hysterectomy to eliminate the menstrual cycle and associated discomfort to Ashley, and breast bud removal to avoid the development of large breasts and the associated discomfort to Ashley. Dubbed “The Ashley Treatment”, the process gained worldwide coverage by the press after Ashley’s doctors published the treatment in a medical journal.

Naturally, as with anything unfamiliar, they received mixed reactions from the public. And this is why I have much respect for Ashley’s parents who started PillowAngel.org to tell Ashley’s story. They wanted to first, help other families who might bring similar treatments to their Pillow Angels, and second, to address some misconceptions about the treatment and their motivations for going through with it.

Ashley’s blog is both informative and moving. There, you’ll find a one-page summary of the treatment. I recommend reading more about her story here.

I’m a 15 year old who took a drug for ADHD for about a month. It was effective in gtneitg me to pay attention, but I noticed that I was very fidgety. My teacher confronted me about my fidgetiness and it was a big problem. Also, my parents noticed I was very moody and very aggressive. I decided to stop taking it after I got into a very aggressive argument with my father. I have a border line intermidiate level of anger problems without any drugs, it just made them worse. Fidgetiness also did not improve, it almost seemed worse with it. In my opinion, it should only be for Predominantly Inattentive Type ADHD. I have Combined Type ADHD and it is at an intermiditate level. I hope this review will help parents and patients decide whether medication is right for them or their children.