Chicago is home to Dare2tri Paratriathlon Club, the nation’s first USA Triathlon sanctioned club exclusively for athletes with physical and visual disabilities. Dare2tri was honored and excited to beÂ named the presenting sponsor for the 2014 ITU World Paratriathlon Chicago, on June 28, 2014 and the Physically Challenged Open Race, June 29, 2014 as part of the ITU World Triathlon Chicago event weekend. Â Currently in its fourth season, dare2tri has served more than 170 youth, adults and injured service members withÂ physicalÂ disabilities and visual impairments by introducing them to the multisport lifestyle. Dare2tri provides triathlon coaching, camps, clinics, training opportunities, adaptive equipment and more for athletes ranging from novice to paratriathlon world champions. Elite athletes, age groupers, first timers, paratriathletes and youth all know the experience of crossing a triathlon finish line can be life-changing. The spirit of the sport is infections, engaging and addictive. Â Dare2triâs motto isÂ One Inspires ManyÂ and we were excited to see many inspire many during the ITU World Triathlon Series in Chicago this past June.

Paratriathlon has been on the rise over the past few years and has seen steady growth since the announcement of its debut at the 2016 Paralympic Games in Rio de Janeiro, Brazil. Â Athletes with physical disabilities and visual impairments, recreational through elite, have gotten involved in the sport and are making their mark on it. Â Paratriathlon is one of the most inclusive community based sports where athletes with disabilities are able to race right alongside their able bodied peers, friends, family and training partners on the same courses and at the same time. Â Seeing a swimmer come out of the water and then putting on their prosthetic leg, an athlete pedaling a hand cycling using only upper body strength or a runner who is blind being assisted on tether by a sighted guide are much more common occurrences at races across the country these days.

Chicago has a very strong triathlon community with lots of clubs, triathletes and races of all sizes. Â It is very fitting that the ITU World Triathlon Series was hosted in Chicago this past June and it is no surprise that it captured the attention and excitement of athletes around Chicago and around the nation. 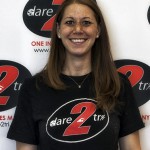 Keri Serota has been in the field of adaptive sports for over 15 years.Â  When she was 12 years old she told her father she wanted to teach people without legs how to water ski, she has since done that several times.Â  Keri studied Kinesiology and Adaptive Physical Education at Indiana University. In January of 2011 Keri started a Paratriathlon program called dare2tri with two friends, Melissa Stockwell and Daniel Tun.Â  The program quickly gained momentum and the group took dare2tri to the next level by becoming a 501(c)3 organization and the nations first USAT Sanctioned Paratri club..

Keri serves as the Executive Director of dare2tri.Â  She is a USAT level 1 coach, the Vice Chair of the USAT Paratriathlon Committee and is a member of the USAT Mideast Council.Â  She has completed many triathlons of various distances and the Wisconsin Ironman in 2011.Â  Her goal is to get as many youth, adults and injured service members with physical disabilities or visual impairments exposed to the sport of triathlon, living active lives and being engaged with their communities.

I really like the idea and meaning behind this kind of event since it help promote that just because someone is physically disabled doesn’t mean that they can’t participate in an active lifestyle. I wonder if there are places nearby that gives people the chance to help support the Dare2Tri organization.

this blog has inspired me to keep the physical education degree and help people be better at what they want to be great in, and allow them to feel as equal as everyone else in the world.