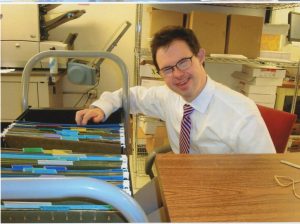 Chris at work at Evanston Rotary International Headquarters in Evanston

On April 26, 2018, my son Chris celebrated his 25th Anniversary working as a Mail Clerk at Rotary Internationalâs World Headquarters in Evanston, IL. He has been working there since high school. Initially, Chris worked part-time at Rotary and attended school part-time. He became a full-time employee after he graduated and has been working full-time ever since.

Chris was really lucky to find a full-time job with benefits when he was 21, but it has taken hard work and dedication on his part to hold that job for 25 years. Chris is responsible for much of his own success. Â He is very punctual and conscientious and he loves going to work. Chrisâ manager says that he is a valued member of the team.

Another reason for his success is that he works with a great group of people in the Mail Center and Print Shop who have always seen his gifts as well as his challenges.Â  Chris never had a job coach, but his team provides natural supports that let him thrive. 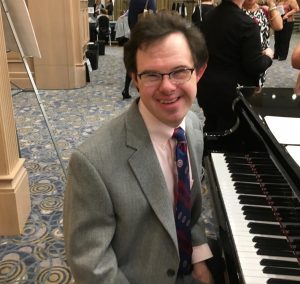 Chris has lived in Evanston since he was born. He attended Evanston Public Schools until it was determined that his needs would be best met at Park School, a Special Education School.Â  At Park School Chris was lucky to have a team of professionals who equipped him with job skills that he would be able to use as an adult. They saw it as their responsibility to provide Chris and other students with a wide array of work experiences while they were still in school. Therefore, Chris had many jobs while he was still a student and that gave him an idea of what he would like to do after he graduated. With support from his vocational coordinator, Chris was introduced to work at Rotary where he found the job he maintains today.

Chris also learned how to take public transportation, a life-long skill, while he was in school.Â  He independently travels to work on the Chicago Transit Authority (CTA). 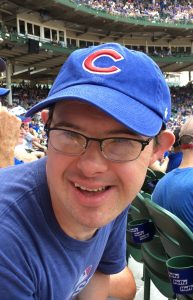 Chris cheering on his beloved Cubs

Chris lives a well-rounded life.Â  In addition to work, he has been an altar server at St. Nicholas Church for many, many years, and he is a very active member of the Evanston community.Â  He can often be seen in his neighborhood taking his dog, Cullen, for a walk.Â  He plays piano and sometimes plays at community events, like the annual fashion show for the National Association for Down Syndrome.Â  Chris enjoys exercise and loves to go on vacation and socialize.

I remember when Chris was a little boy people would ask me what I wanted for him when he became an adult. I used to say that I wanted him to have options and choices in his life and to have a good life.Â  Itâs what I still want for him today. On June 9 Chris will turn 46. Â I would say that he has a pretty good life.

If you ask him, Chris says that he has a GREAT life!