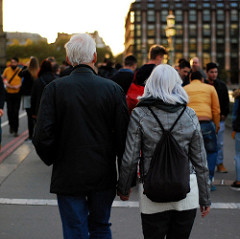 June is Alzheimerâs Awareness Month. Â 5.4 million Americans will face Alzheimerâs and efforts to find a cure are making very slow progress. Â But since we focus on actionable feedback on this blog, weâd like to take a moment to talk about our own experiences with it and some recommendations. Â Â

One of our staff members relayed a story about his grandfather, who has been experiencing the symptoms of Alzheimerâs for four years now. Â He said that one of the more under-discussed issues that come along with Alzheimerâs are how it affects the primary caregivers. Â When you have a couple who has been together for over 60 years, the dynamic doesnât want to change. Â But it does. Â

Everything becomes something to be remembered on behalf of the individual with Alzheimerâs and all the pressure to keep the household running falls on their partner. Â Thatâs a hard thing to comprehend, particularly when theyâre so good at it you donât realize itâs happening until years later. Â

Alzheimerâs is a slowly developing situation and can often be masked by things as simple as a cheerful personality. Â So what are some actionable items that individuals who are being faced with an Alzheimerâs diagnosis and their support systems can do?

Once it comes around, though, if you have a family member with Alzheimerâs, one of the best things you can do is continue to visit and stay involved. Â Just because things are forgotten doesnât mean the person has to be forgotten. Â

Filed under Disability in the Media, Education, Events, Mental Illness
Share this:

My only grandpa I had did have Alzheimers and it was hard for him with out being able to do certain things that he used to be able to do. I’m really hoping that someday scientists will be able to find a cure for Alzheimers.

My Close Friend has a similar mental illness like alzheimers it’s the situationâis only you hear strange voices in your head/mind and sometimes you do unexpected things like you feel like suicide thoughts but I hope that there’s a cure/treatment for this because it’s really bad I feel like I could really end up losing this close friend of mine forever I really don’t want to lose him ever I care about this close friend what can I do to help him Someone does anyone have any ideas or tips for me please help me out with this situation!